Local High Wycombe schools have had the chance to win a share of £1,500 for the second year running in our Quids for Kids competition.

This year, Castlefield, Highworth, Hazlemere, Loudwater, Chepping View, The Disraeli School & Children Centre, Hughenden, Mapledean, Millbrook, Tylers Green, Widmer End, Bowerdean Nursery and Carrington Infant School were all in the running to be crowned Eden’s Quids for Kids 2019 champion. With a record breaking 13 schools taking part, a 30% increase from 2018’s competitors, it proves the popularity of the competition.

Over the past two months, school staff and parents alike have been rushing to convert their Eden till receipts to points in order to keep their chosen school ahead in the competition, but this time it was Castlefield School who were victorious, claiming the top prize of £1,000. Finishing closely behind in second and third place were The Disraeli School & Children Centre and Loudwater who won £350 and £150 respectively.

“The £1000 prize money is being put towards the development of an unused area of the school, converting it into a dual function outdoor classroom and reading area for use in teaching time and during children’s breaks.

“As a result of the Quids for Kids prize money, we have now reached our funding target and are in a position to proceed with this project. We anticipate our new outdoor classroom to be completed ready for the start of next academic year.”

Miss Pikulski and Mrs Gowers, Co-Headteachers of second place The Disraeli School & Children Centre, said “We are delighted to have been one of the winning schools in Eden’s Quids for Kids competition. It has been fantastic to have the whole school community working towards this together and the prize money will help enormously towards our fundraising for new playground climbing equipment.”

Third place winners, Loudwater School, also commented “Thanks to all the parents who have supported Loudwater School by shopping in High Wycombe’s Eden Shopping Centre. What a fantastic way to encourage parents to shop locally in the Town Centre.”

Eden’s Marketing Manager, Niamh Crowley, said “We would like to wish huge congratulations to Castlefield School, our Quids for Kids 2019 champions! Seeing the smiles on the faces of the pupils and staff when we presented the school with their cheque in one of their assemblies was a wonderful feeling. We’re happy we can do our bit in helping the local community. Quids for Kids was such a success this year that we will definitely run it again, and we hope even more schools will get involved next time! Thank you to everyone who shopped at Eden and took their time to donate points to the school of their choice. It wouldn’t have been possible without their help.” 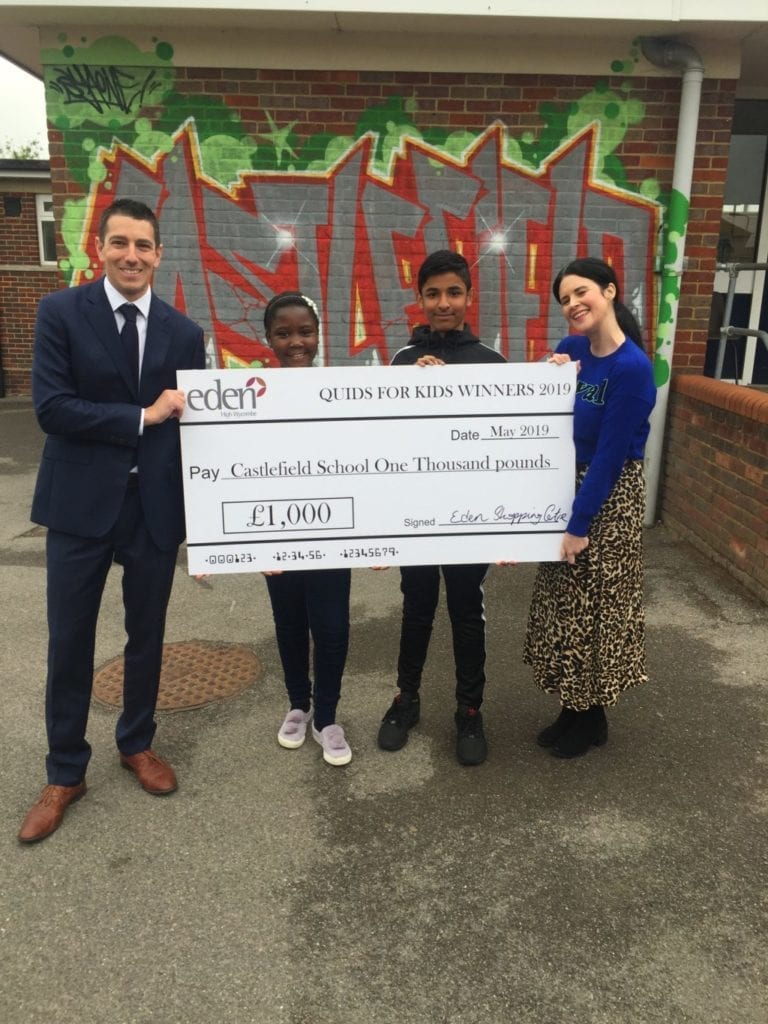